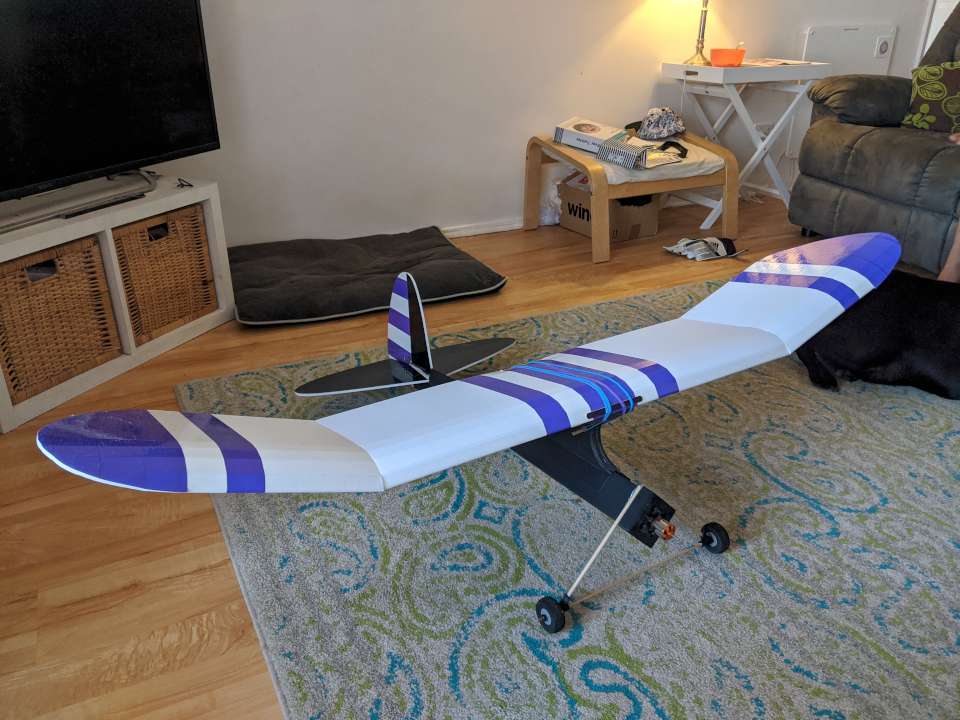 In my last post I put a picture of a Lanzo Bomber as the featured image. Designed by Chet Lanzo in the 1930’s, the Bomber was (and still is) a very popular free-flight and R/C design with it’s pylon mounted wing and iconic diamond section fuselage.

I needed something to relax my mind after a particularly stressful week so I thought I might try to build a large(ish) foam board model in the same style as the Bomber. There didn’t seem to be many challenges to overcome as the design is really only a box fuselage with a pylon wing. I fired up Sketchup and started drawing…

I went for a target span of 1600mm, simply because it was two width of foam board. I would make the center of the wing a flat 800mm section with two 400mm outer panels fixed with plenty of dihedral.

The fuselage is a simple box which tapers towards the tail. The tail surfaces were just drawn freehand to a shape I found agreeable and the adjusted to fit the required dimensions.

The pylon was the only real challenge as it had to be strong enough to support that big wing without wobbling in the air. What I did was laminate four pieces of foam board to make a nice thick pylon and then extend panels from the outer two laminations at 45 degrees. These were then glued directly to the fuselage forming a really strong bond.

To save paper, I only printed out the curved pieces in full size. The entire plan I exported to Layout and added measurements so I could draw them directly onto the foam board.

The build was very easy! The fuselage came together nice and straight. I did remove a little too much material at the back and had to do some trimming to get the pushrods to run smoothly but everything else was spot on. I made a couple of formers to strengthen the fuselage but nothing dramatic.

For the nose, I 3D printed a piece that slipped over the fuselage tube. This not only aligns the tube but also strengthens the nose. The motor has a couple of degrees of downthrust to counteract the drag of that pylon mounted wing.

With the exception of that nose I tried to keep everything as old-school as possible. Both the wing and the hatch are held on with bands and dowels. The pushrods are traditional wooden dowels with wire ends. I used Turnigy 9g servos as this is never going to be an aerobatic model so high torque controls were unnecessary. Overall the design and build process was quite enjoyable.

To Roll or Not?

In the spirit of the original I put some landing gear on my Bomber. I only had some wooden dowel to hand so it was never going to be the strongest. I had to change the design a bit to get more prop clearance and it did work for a couple of rolling takeoffs. It was never to be though as the dowels kept breaking and I eventually decided to remove the legs altogether and have done with it. Next time I get to the model shop I’ll get some thick wire and try again but until then I can cope with hand launches just fine.

It took me a couple of goes to get a video of the old girl flying. In that time I discovered it needed a bit of lead up front because of that short nose and a lot of expo to make it nice and docile.

The flying performance is fantastic. She climbs a lot under power so I do need to adjust the wing incidence a bit. However, a gentle push at half throttle and she will cruise around for hours in calm air. Lazy loops are fun and the glide is excellent. I found the best way to fly this model is low and slow, making wide turns around the field.

If you want to have a go I’ll make all my files available below. In the zip you’ll find my Sketchup file, PDFs of most of the components, the A4 plan and the stl file for the nose cone.