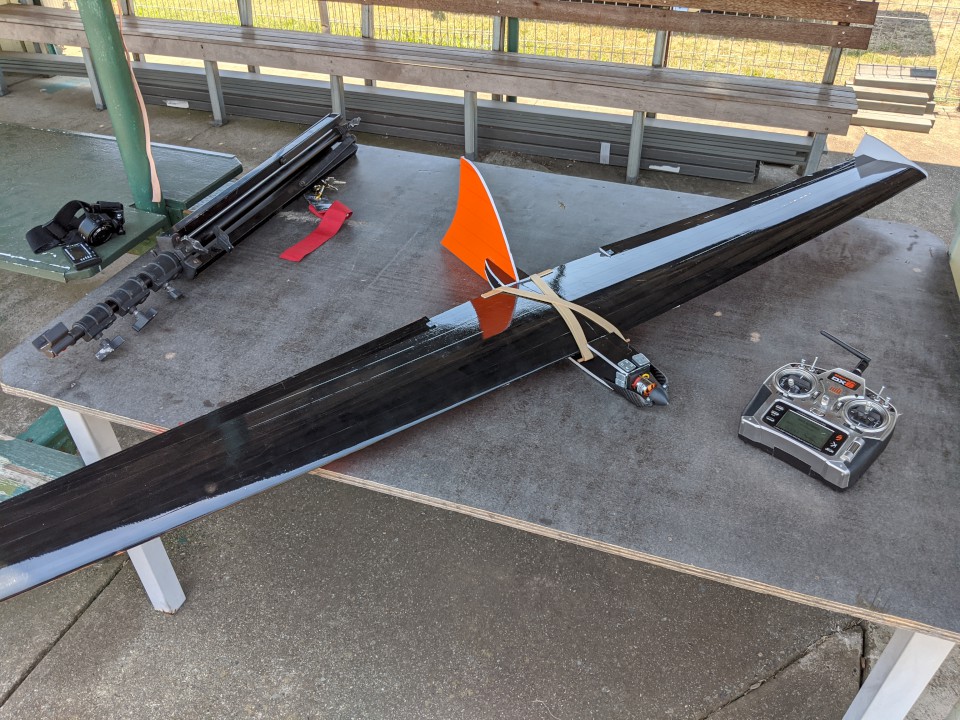 Recently I started work on a prototype fixed wing UAV that for one reason or another never got finished and flown. As a result I found myself with a pair of 1000mm foam board wing panels sat on the shelf. I was going to simply throw them in the bin but curiosity got the better of me and I decided to make a plank instead…

When is a plank a plank?

Basically a plank (in the case of a flying model, not a carpentry term) is a tailless fixed wing aircraft with zero sweep. Sometimes the wings taper, sometimes they do not. Usually there is a pod in the center of the wing supporting the motor and battery but not always.

The wings I had were nicely made with an aluminium joiner taking some of the stress out of the design. They have a bit of a taper and full width elevons. There were a couple of small pods attached that were originally meant to support the tail booms so I left them there to house the servos rather than pull them off and make a mess!

The fuselage pod itself is about as simple as it gets with a box construction and large sheet tail. The motor mount was 3D printed from ABS and glued up front. I did find I needed a bit of ply reinforcement to stop the fuselage sides from buckling and to hold the wing dowels.

Planking – It’s a question of balance…

Tailless plank wings are VERY sensitive to CG changes. As a rule of thumb the balance point is at 20-25% of the mean chord. I set the initial balance point at 25% with the 4-cell lipo wedged right up in the nose. The maiden flight (and my blood pressure afterwards) proved this was way too far back and 60g of lead on the nose brought it forward to the 20% mark and smoothed things out.

I also found that I needed a huge amount of induced reflex (basically up elevator trim) and around 75% expo to make it a nice flying model. Even then a steady hand on the controls and smooth stick inputs gets the best performance.

Was is worth the effort?

Hell yes! That two meter wing is majestic in the air and once I got it dialed in the performance was really quite enjoyable. I reckon eventually it will make a nice glider and probably go well from the slope.

I’m sorry there wasn’t more construction details and photos. The wing was already built and the pod only took two hours from start to finish. Just enjoy it for what it is and never throw out those old wing panels.